A canvas controller consists of a script with a corresponding Scriptable Object instance, as well as its Canvas View contained within a Prefab asset. These three assets will now exist at the specified location.

Your screen's UI content is placed inside this prefab. See below for an example of a simple screen from the Assassin demo.

The AlertCanvasController from the Assassin demo.

The Canvas component has a default Render Mode of Screen Space - Overlay. However, this is not the render mode that will be used at runtime and can be ignored.

When a canvas controller is presented, its view is contained within a parent CanvasWindow, making it a sub-canvas. It is this window that provides the root canvas and as such it is the window's canvas whom will provide the render mode. See the Canvas Window section for more detail.

The Canvas View Owner Bindings object in the prefab is for View Bindings, which are covered below. UI content shouldn't be added underneath this object.

The canvas controller's script file is where you can perform any custom scripting and logic related to your view controller.

As a canvas controller is a Scriptable Object, any public instance variables will be exposed in the asset's inspector. This can be used to hold references to other assets. For example, the Friends List canvas controller in the Assassin Demo holds a reference to a data model object containing friends. 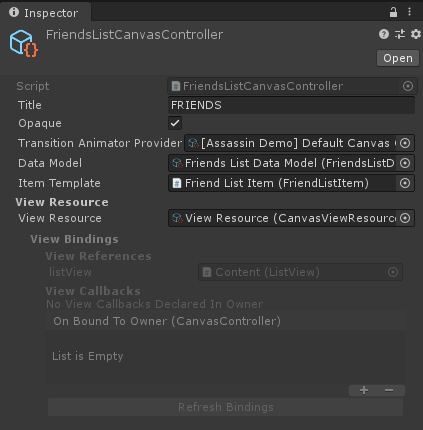 References to view objects – objects within the canvas view prefab – can be made using a View Reference. Similarly, calling a method on the canvas controller from the view, such as from a UI.Button, can be achieved using a View Callback.

Attach UI components, scripts, and behaviours to the Game Objects in the prefab, just as you normally would with Unity UI. This helps to keep the canvas controller lightweight and focused upon its primary responsibility of managing its view. When required, use View Bindings to communicate between the canvas controller and the objects in its view.

A view reference allows your canvas controller to reference a component within its view using a simple field. This is useful if you want to, for example, configure a component in ViewDidLoad or perhaps restart an animation in ViewDidAppear.

To create a view reference, declare a field on your canvas controller and decorate it with the [ViewReference] attribute.

This field will now be populated with the value set in the inspector upon instantiation.

To expose a method in your canvas controller to its view, decorate it with the [ViewCallback] attribute. 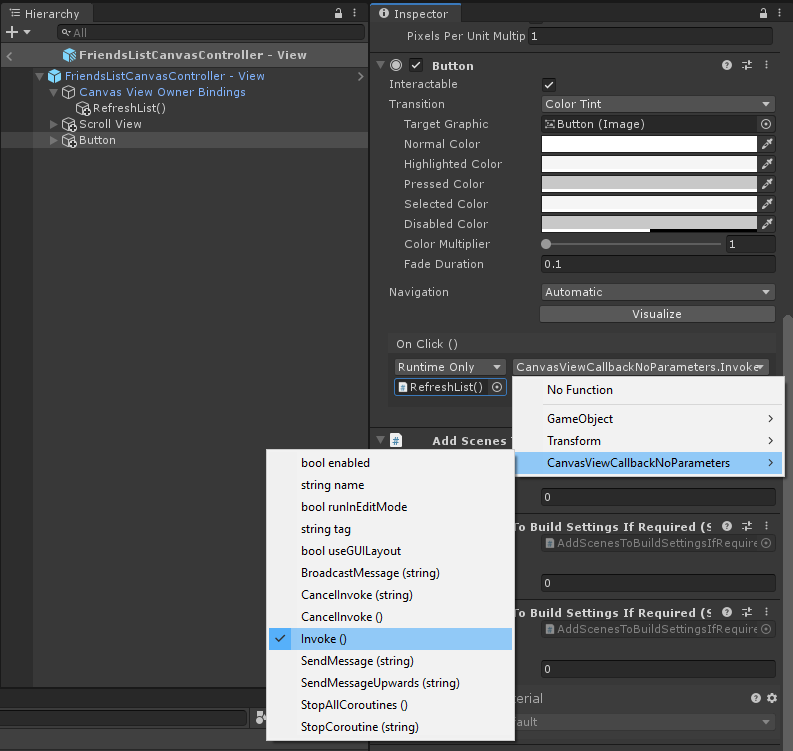 Invoking A View Callback From A Button

This method will now be invoked when the button is pressed.

On Bound To Owner Event

The Canvas View Owner Bindings component includes an On Bound To Owner event. This event is invoked when the view is bound to its owning canvas controller, as detailed above.

This event can also be used to configure any view components upon load. For example, the following component configures a label's text with the canvas controller's title. The ConfigureWithCanvasController method can be added to the On Bound To Owner event in the inspector and the label will be configured upon load.

The above functionality could have been achieved with a View Reference in the canvas controller to the label. It's a matter of personal preference how you choose to structure your code here. Using this event where appropriate can help to keep the canvas controller lightweight and focused upon its primary responsibility of managing its view (and not all the UI components within it).

Canvas controllers are presented within a CanvasWindow. A canvas window contains a single user-interface flow. When a canvas controller is presented, its view will be instantiated and added to the window. Inversely, when it is dismissed it will be removed from the window and destroyed. A canvas window exists in the scene you wish to present it in.

The recommended way to create user-interface flows is using Graphs. To create a new canvas window when using graphs, select Add Graph To Current Scene from the graph's dropdown menu. This will automatically create a new CanvasWindow in the current scene along with a CanvasGraphPresenter configured with the current graph.

However, you may also use the View Controller system directly without using graphs. In this case, you must configure the window yourself. Firstly, create a new canvas window in the current scene by selecting GameObject/UI/Canvas Window (UI Graph) from the menu. To configure the window, create a script to set its root view controller and present it.

Here we present the window in the Awake method with no animation. This ensures the view is on-screen immediately. When our mainMenuCanvasController subsequently performs a transition, such as Present, it's view will be instantiated and added to the window.

The template prefab that UI Graph will use when creating a new canvas window can be changed in the package settings.

All subsequently presented CanvasViews will be embedded within this parent CanvasWindow. As such, their Canvas components will inherit the canvas window's properties. Two particular properties of note here are:

Additionally, the canvas window includes the camera that renders the user-interface, so any camera properties can also be changed here.

A window can be dismissed using its Dismiss method. This will dismiss the window's root view controller (which dismisses all of its presented view controllers) and destroy the window itself upon completion. This can be useful when using multiple windows, such as in a scene transition.

Alternatively, you are not required to use the Transition Sequence Animator system and may script your own transition animations yourself. To do this, you are required to create two components:

You then set your view controller's transitionAnimatorProvider to your animator provider, which will supply your animator to UI Graph when a transition is performed. Separating the responsibilities in this way allows the provider to return different animators depending upon the transition being performed.

Including [CreateAssetMenu] allows instances of the animators/provider to be created in the Unity menu.

Next, implement your transition animation in the animator class. For example, a simple scale animation could look something like this:

Now we want to provide this animator in our transition provider.

Finally, create an instance of each using the Unity Create menu, configure their properties, and drop the provider onto the relevant view controller's transitionAnimatorProvider field. When this view controller performs a transition, it will now use the custom provider and animator.